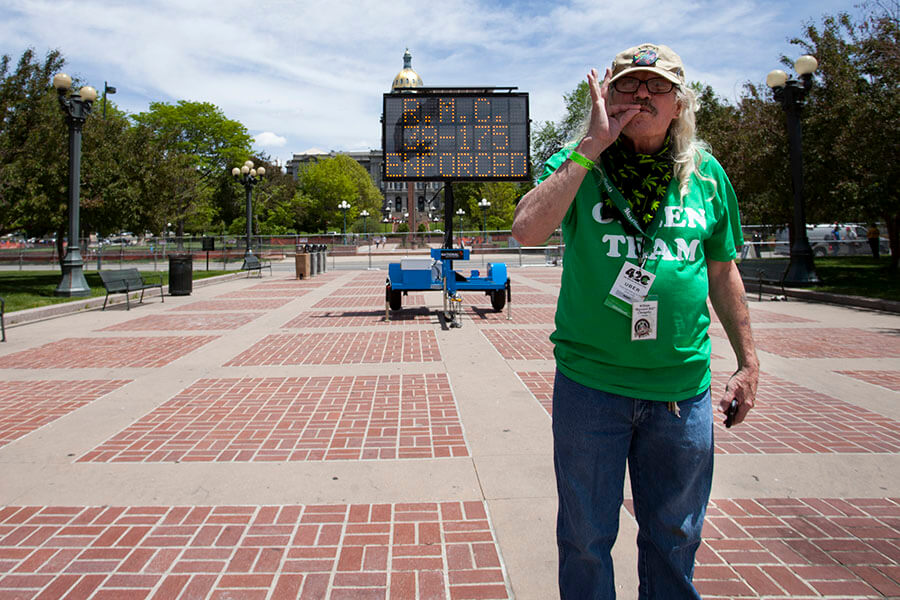 Above:  William “Wayward Bill” Chengelis, a marijuana and political activists from Denver, stands in front of a sign that warns patrons of the illegal consumption in public spaces at Civic Center Park on May 21, 2016. Photo by Brandon N. Sanchez • bsanch36@msudenver.edu

The sun was shining bright and all was calm as thousands gathered in Civic Center Park in Downtown Denver on May 21 for the rescheduled Official 420 Rally 2016.

Organizers rescheduled the festivities a month after the original date due to a snowstorm that hit Colorado. Although numbers were lower than previous years, the annual rally still provided the marijuana community an opportunity to come together and celebrate.

For Lorena Ochoa and her husband the 420 Rally provided the couple an opportunity to launch their brand of custom dabbers. Dabbers are an alternative way cannabis connoisseurs can experience the wonders of marijuana oils, hash and wax. The duo moved from Pueblo to Denver in 2013 and have been networking with pot shops to spread the word. Aside from publicizing their names, the Ochoa’s participate in the 420 Rally to raise awareness of the benefits of marijuana.

Marijuana enthusiasts lounge around the grass of Civic Center Park and partake in the use of marijuana. Denver Police issued fewer citations for public consumption. May 21, 2016. Photo by Brandon N. Sanchez • bsanch36@msudenver.edu

“I think it’s stupid of our country to deny medical care to people,” Ochoa said. “Marijuana should be legal everywhere and events like this help bring the cause closer to people. The hospitality at events like this goes to show you that the negative portrayal [of the marijuana community] in the media is false.”

Many attendees like Erin Duron showed up to see rapper Wiz Khalifa perform. “His show was great,” she said. “I wish the crowd was a little more energetic, and it was a little more crowded, but it was still fun.”

By midafternoon when the weather started to cool down groups of people listened to headliner Lil Wayne perform while relaxing in the grass.

The air was surprisingly fresh considering the event’s nature. Stephanie Lopez, who was working her father’s booth Glass Gallery, stated the lack of marijuana use was due to cops ticketing people for smoking.

Officer Jacob Herrera took a more lenient approach and said, “At events like this, live and let live.” The crowd was easygoing and Herrera said there were no major incidents to report.

For some, the lack of marijuana was a good thing. Shenae Micelvin, the chair coordinator of the nonprofit organization Falcons Youth Organization, and football coach for the organization, Aaron Grimes, fundraised at the rally. Micelvin let kids involved in the organization run the booth and sell snacks, such as cheetos and candy bars.

“We originally were not going to participate in the event,” Micelvin said. “But this time around we knew it was going to be more kid-friendly. Organizers encouraged kids.”

Falcons Youth Organization raised roughly $500 for students to participate in after-school activities, and were happy to be involved in a major part of the community amassed at the 420 rally.

People will remember the Official 420 Rally 2016 as a relaxed gathering of not only cannabis enthusiasts, but families and friends wanting to spend a day in the sun.

KENTUCKY CANNABIS RALLY AT THE ROTUNDA IN FRANKFORT!

Statement by the President

Merry Christmas and Happy Holidays to All!

dpa: “ In an unprecedented move, the House Judiciary Committee will vote on the MORE Act this Wednesday.”

"…There is NO SUCH THING as a "Good" Pot Law, and that INCLUDES so called "Legalization"…."