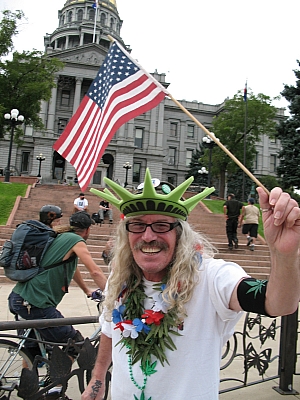 The torch — or is it the spliff? — has been passed at the United States Marijuana Party, which this week announced Wayward Bill (also known as William A. Chengelis) of Denver, Colorado is taking over its top position.

“After eight hard years managing the party Richard was ready to move on,” Wayward Bill said in a press release. “Sheree Krider, VP, United States Marijuana Party recommended me in a party memorandum for the top position. She also resigned her position within the national office. I spoke to both her and Richard prior to making my decision to accept. It was a happy coup.”

According to Wayward Bill, his taking the helm means that the USMjP will now be located in Denver. “The address has yet to be determined,” he said. The party was previously headquartered in Peoria, Illinois.

“I will be taking a more proactive approach by hopefully first moving our current USMjP chapters close to their state capitols so that they can be more involved with marijuana law reform in their respective states,” Wayward Bill said. “You will see us everywhere. The halls of government, in the media, in social media, at political functions and rallies, on online forums, everywhere.

Wayward Bill said he would be requiring all USMjP state chapters to become financially solvent within six months to apply for nonprofit status in their state. “This is the first step toward becoming actual state political machines,” he said. “Time for the status quo to go.”

“On the national level the USMjP will be working with the Annual Smoke-In coalition plus the Denver 420 Rally Team to bring a bigger, badder, and better annual 4th of July Washington, DC event,” Wayward Bill said.

“Myself and others are currently reviewing the USMjP mission statement for possible edit or rewrite, Wayward Bill said. “The USMjP needs a revamp. Look for change.

“The United States Marijuana Party of Colorado will continue to be chaired by me,” Wayward Bill said. “I am dictated by my own directives and will be working on making the Colorado party a nonprofit.”

KENTUCKY CANNABIS RALLY AT THE ROTUNDA IN FRANKFORT!

Statement by the President

Merry Christmas and Happy Holidays to All!

dpa: “ In an unprecedented move, the House Judiciary Committee will vote on the MORE Act this Wednesday.”

"…There is NO SUCH THING as a "Good" Pot Law, and that INCLUDES so called "Legalization"…."